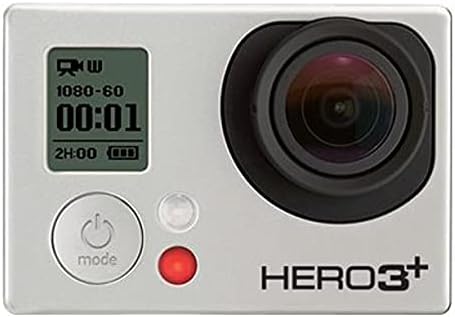 The GoPro HERO3+ Black Edition Camera is 20% smaller and lighter than its predecessor, the HERO3. It also features faster built-in Wi-Fi than the HERO3. The HERO3+ is designed for recording a variety of adventure sports and it comes with a rugged housing that is waterproof down to a depth of 131' (40m). The camera captures 4K Cinema, 2.7K Cinema, 1440p and Full HD 1080p video. It can shoot 960p and 720p video as well. The camera supports both NTSC and PAL video systems, and it can record up to 120 frames per second (fps) when shooting in 720p mode. For still images, the HERO3+ supports up to 12MP photos with a burst rate of up to 30 fps.
The HERO3+ includes the GoPro Wi-Fi Remote and it's compatible with the optional LCD Touch BacPac and Battery BacPac (both sold separately). The Wi-Fi Remote has a range of up to 600' (180m). Plus, it's waterproof down to 10' (3m) and it can control up to 50 cameras at a time. The HERO3+ camera features an ultra wide angle glass lens, a low-light image sensor and a microSD card slot that accepts up to 64GB cards. There's a built-in mono microphone and a port for optional accessories including the 3.5mm Stereo Mic Adapter and Composite A/V Adapter, which are both sold separately.
PC Connection: yes, USB
Resolution: 4K
Operating System: MAC OSX 10.5 and later; Windows Vista/7 and later
Manual Exposure: yes

Added to wishlistRemoved from wishlist 0
Add to compare
$79.99